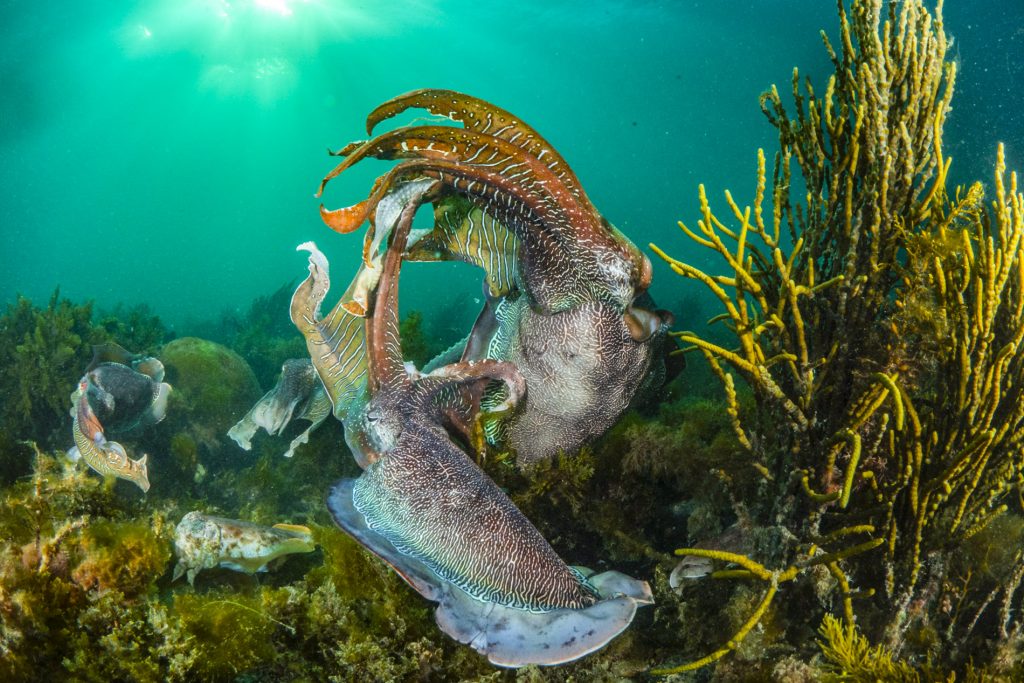 Cuttlefish of Whyalla – A Natural Wonder

The early morning air was cold, and getting out of our warm bed to go diving seemed like madness. But having visited Whyalla in cuttlefish season for the last five years, we knew how much we would enjoy being in the water.

Whyalla is where the “outback meets the ocean”. The rocky red landscape along the coast transitions into cool emerald water. It is also the ultimate destination for tens of thousands of endemic giant cuttlefish every winter, who migrate here to mate and spawn. 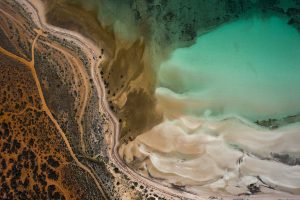 The outback meeting the ocean

Normally, we travel here from Sydney. So this year being already “stuck” in South Australia, due to COVID-19 border closures, worked in our favour. We did not have to miss out on cuttlefish season!

As soon as we submerged into the shallows at Point Lowly, we could see cuttlefish straight away. Large groups of cuttlefish engaged in courtship, fighting and mating, sprawled from just near the shoreline, outwards over the rocky reef. There was no need to venture deeper than two to three metres to witness the action. 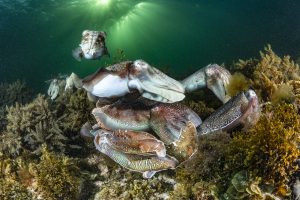 A cluster of cuttlefish

The male cuttlefish were changing colour and shape in the blink of an eye, many guarding their chosen female from the hundreds of other keen suitors. Some were using their large bodies like a television screen, to animate moving stripes across their skin. This part of cuttlefish-language, I had the feeling could be translated as “move on mate, she’s with me”. 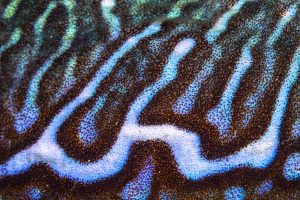 When body language wasn’t enough to deter the competition, physical fights were breaking out. These brief wrestling matches were a mass of angry tentacles, and spectacular to watch. Occasionally, a fur seal would show up to hunt, which would send the cuttlefish, quite sensibly, into hiding under rocky ledges. But somehow they did not seem to see us divers as a threat, and mostly ignored our presence.

Being surrounded by wildlife up close, carrying on with their natural behaviour as if you weren’t there, is the ultimate dream for any wildlife lover. As wildlife photographers, it is at first hard to know where to point your camera, or even figure out what is going on! But gradually you can hone in on hotspots of the drama.

It is easy to lose track of time in this environment. But usually after an hour, our cooling body temperatures dictated that it was time to end the dive, drive back to our warm cabin, and get ready to repeat the experience the next day.

This mass aggregation of giant cuttlefish is the only one of its kind, and understandably usually draws visitors from all over Australia and even the globe. It is natural wonder that South Australia should be proud to showcase, and proud to protect. 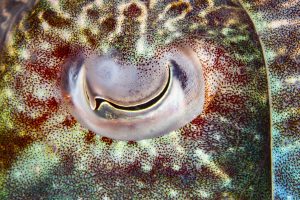