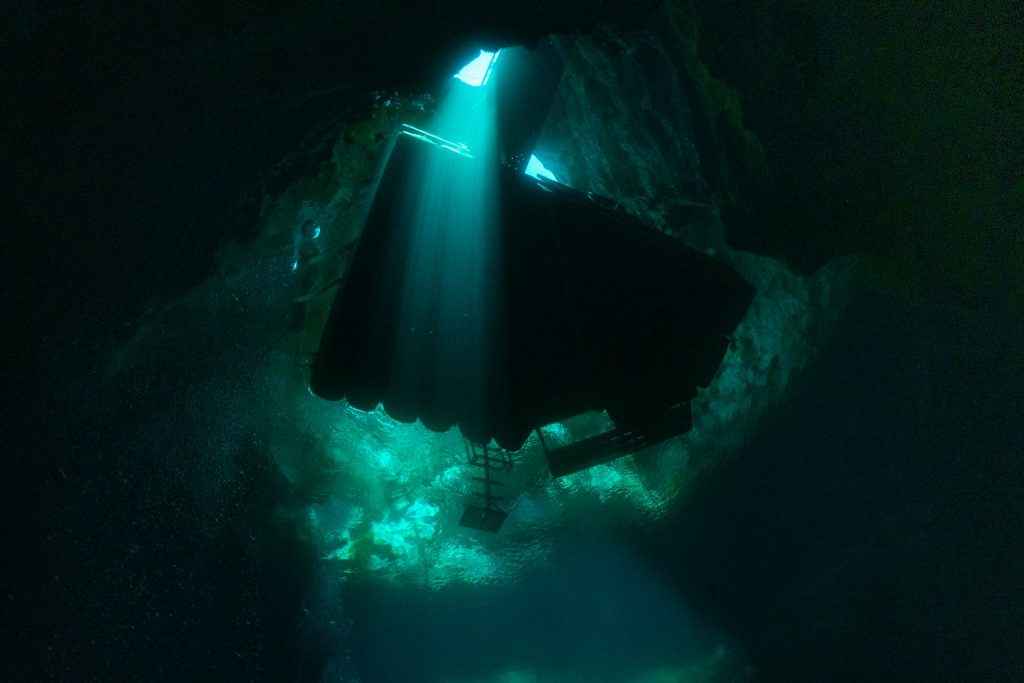 After a mammoth drive crossing three states, we arrived in the seaside town of Port MacDonnell, just south of Mt Gambier.   I had booked us a campsite right on the beach, with visions of us playing in the waves and relaxing on the beach in our down-time.  The beach is beautiful white sand, but the Southern Ocean looks wild, dark grey, churned up by a howling wind which comes straight from Antarctica.   Not so tempting after all.

Luckily none of our planned diving was to be in the ocean.

Mt Gambier is home to hidden jewels of the underwater world…. Sinkholes.  It is a cave-divers dream destination, with cave systems only to be explored by those with highly specialised training.   Scott and I do not have cave-diving qualifications but there were still three amazing sites we could dive and snorkel.

The fact that Kilsby’s is located in the middle of fairly non-descript sheep farming landscape, makes it even more surprising when you arrive at the edge of what looks like a giant pot-hole surrounded by sheer limestone cliffs.  The fresh water filling the sinkhole has filtered up through the limestone over thousands of years, so is crystal clear and an extremely enticing shade of dark blue.

Standing at the edge, looking down, we could see the sole reptilian resident swimming around – a recently released fresh-water turtle.  “Turty” is thriving in the new found freedom of his own private sinkhole! 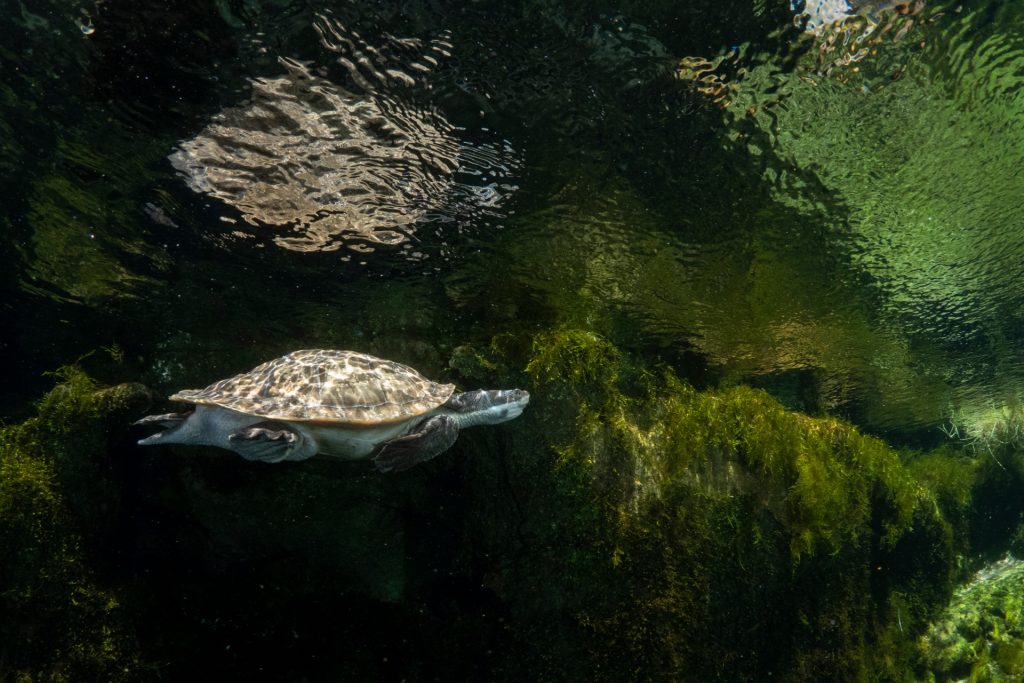 After our dive briefing,  we geared up, climbed down a ladder down to the dive-deck, and eagerly jumped into the dark blue enigma.  The water was so clear we could see the entire sun-lit section of the sinkhole, whilst the sign-posted “danger, keep out” area petered off into darkness – a strictly cave-divers only zone.

Every now and then, when the sun broke through the clouds, light beams penetrated the gloom of the sinkhole – a truly out of this world sight. 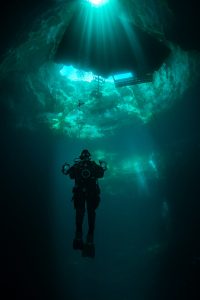 Picture the lushest and greenest of gardens, then imagine it underwater.  Welcome to Ewens Ponds.

I guess you could say Ewens is a drift dive, as you flow through a sequence of three freshwater pools connected by channels, and climb out at the other end.

As we drifted through the ponds, the water was so clear that we had the feeling of flying through the air around a botanical garden.  The only visuals giving away that we were underwater, were the small schools of Ewens Pygmy Perch – a species found here and nowhere else.   Those, and one sighting of a pouched lamprey –  the remnant of an ancient lineage of jawless fish.

The ponds culminate in a stream that flows the remaining four kilometres to the ocean.  We had planned to drift-snorkel the entire stream the next day, but the weather was not on our side on that occasion.  Next time!  Ewens is addictive and we will be back. 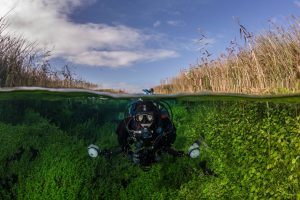 Fresh spring-water rising up under pressure through limestone rock, has created a deep, deep chasm.  The same process has sculpted a large underwater cavern known as “The Cathedral”.  To SCUBA dive here at Piccanninie you need to be a certified cave-diver, but snorkelling is possible for everyone else.

We didn’t get to snorkel this time. Due to rough weather approaching, we decided to pack up our tent and move on to somewhere more sheltered.  However, we had previously snorkelled Piccaninnie in 2016, and found it to be quite a different experience from both Kilsby’s and Ewens.

Firstly, you cannot see the bottom of the chasm as you are snorkelling, only darkness below.  It is quite eery!  Secondly, the water, when we visited, was not as clear as the other sinkholes, which added further to the eeriness.  There was plenty of green vegetation around us, and Scott captured a picture of me (below) which sums up the feel of the experience. 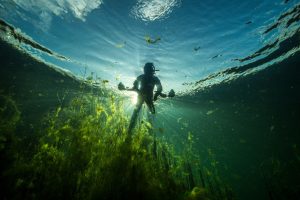 Well, we have escaped the rough weather, and are now sitting comfortably in an Air BnB for the night – a special treat reserved for when needed!  More updates soon….

NOTE: To snorkel or dive at the above sites, you need buy permits (can be done on line via National Parks SA).  Kilsby’s Sinkhole is on private land and can only be accessed with a licensed guide.   We went with Reef2Ridge Mt Gambier.  Also note that touching or kneeling on the bottom of these sites is strictly forbidden due to the risk of a silt out or damaging the fragile ecosystem – excellent buoyancy control is needed if on SCUBA.